Flying in the nose of a World War II B-25 Mitchell bomber over the Salton Sea. Today April 18th is the anniversary of the Doolittle Raid On Tokyo in 1942. Sixteen B-25’s flew off the deck of the USS Hornet as the first retaliation for the attack on Pearl Harbor. Of the 80 crew members, 77 survived the mission. Eight airmen were captured by the Japanese Army in China; three were later executed.

Video from a hat mounted GoPro as I shot video and photos with my iPhone and a Fujifilm X-Series camera.

We were headed for a Veterans Day flyover at the Glamis Sand Dunes with other World War II aircraft. I was texting our location and timing and also doing social media posts.

Also somewhat of a video self; you can see my reflection on the iPhone.

The B-25 “Executive Sweet” from the American Aeronautical Foundation. That day flying out of the Palm Springs Air Museum.

It was 75 years ago on April 18, 1942 that sixteen B-25B Mitchell bombers did the impossible task of flying off the deck of the USS Hornet aircraft carrier en route to Tokyo. Without fighter escort, without fuel to guarantee a safe landing, the brave flight crews flew into uncertainly to deal the first major blow against Imperial Japan following the devastating attack on Pearl Harbor.

Tomorrow, Tuesday April 18th at the Palm Springs Air Museum at 11:00 AM, come hear the story of the “Doolittle Raid”, the “Raid On Tokyo”. And following at Noon watch the “Pacific Princess” B-25 start up right at the Museum and do a flight demonstration. Then imagine sixteen of these thundering aircraft taking off from the carrier deck right in front of you!

Your presenter will be Lt. Col. Blaine Mack, World War II P-38 pilot, later F-86 pilot and Strategic Air Command pilot flying B-47 and B-52 bombers. What an incredible opportunity at the Palm Springs Air Museum. Please come join me! Thank You! 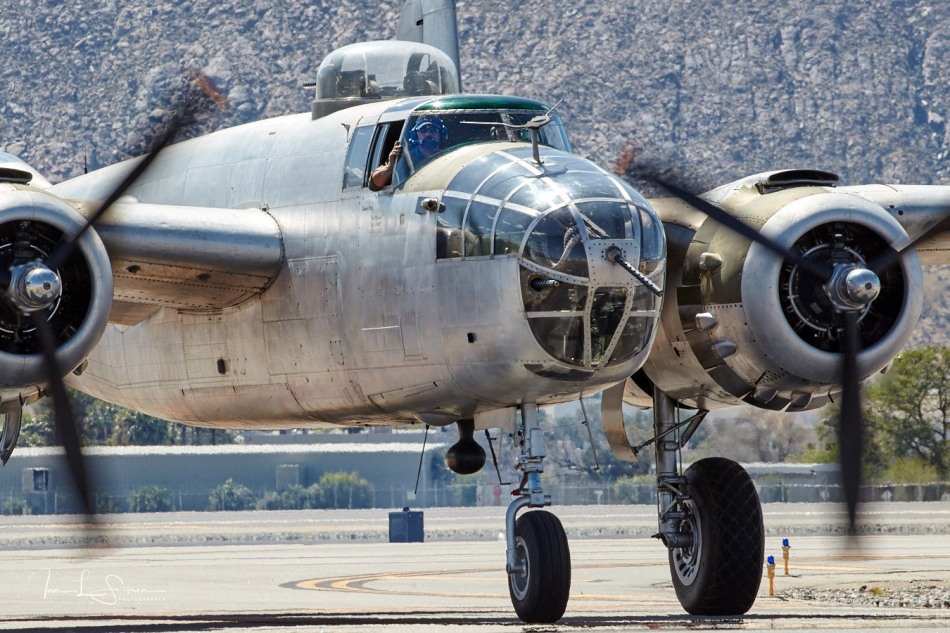 As a long time photographer in the bodybuilding and fitness business, the first thing I noticed is that she works out. The World War II Bomber “Pacific Princess” visiting at the Palm Springs Air Museum. You can watch her take off again on this April 18th to commemorate the day of the “Raid On Tokyo” on April 18, 1943.

Come on out to the Air Museum tomorrow morning, Sunday, opening extra early at 8:00 AM. The “Pacific Princess” will again take to the air at 8:48 to coincide when the carrier USS Hornet departed San Francisco carrying the B-25 aircraft that would make the raid on Tokyo on April 18, 1942. Called the “Doolittle Raid”, it was the turning point in the War with Japan and also in the history of air power. Not to be missed! See you there! AND… Admission is free for this starting at 8:00AM until flight time! 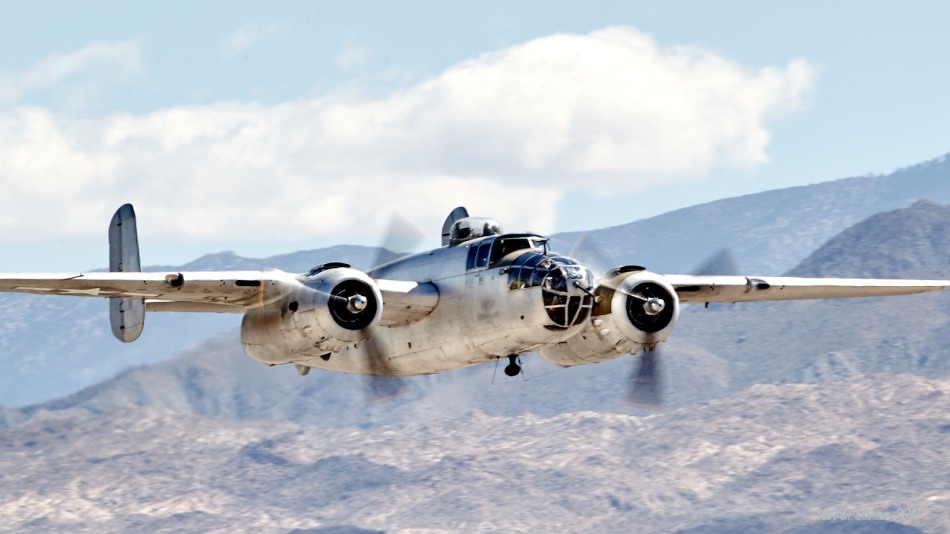 B-25 Over Palm Springs

The World War II B-25 bomber, Pacific Princess arriving and flying over Palm Springs for the Palm Springs Air Museum. In commemoration of the 75th anniversary of the famed Doolittle Raid on Tokyo, the Pacific Princess will fly again today Saturday April 1st and also on Sunday April 2 at 8:48 AM to mark the time that the B-25 bombers onboard the carrier USS Hornet left San Francisco on their mission in 1942. My pleasure here to photograph and fly yesterday on another historic aircraft.

“At the outbreak of World War Two, the United States was in no way prepared to wage war. Although the US declared war against Germany in December of 1941, the country lacked the manpower, the equipment, and the experience it needed to fight. Even had an invasion force been ready, a successful assault on Nazi-occupied Europe could not happen until Germany’s industrial and military might were crippled. Because no invasion could happen without air superiority, the first target was the Luftwaffe – the most powerful and battle-hardened air force in the world. To this end, the United States Army Air Forces joined with Great Britain’s already-engaged Royal Air Force to launch a strategic air campaign that ultimately brought the Luftwaffe to its knees. One of the standout units of this campaign was the legendary 303rd Bomb Group – “Hell’s Angels”. Presented by Jay Stout”

Last but not least, on Saturday morning between 10:30 – 12:30 you can take the seat in the cockpit of an AT-6 Texan, single-engined advanced trainer aircraft used to train pilots of the United States Army Air Force. You can have your photo taken too! All fun!

The Pacific Princess has an interesting motion picture career history. She was used in the classic film “Catch 22” and also “1941”. For the movie “Pearl Harbor” she took off from the deck of both the USS Lexington and the USS Constellation. To commemorate the 50th anniversary of the end of World War II she was flown off the carrier USS Carl Vinson. 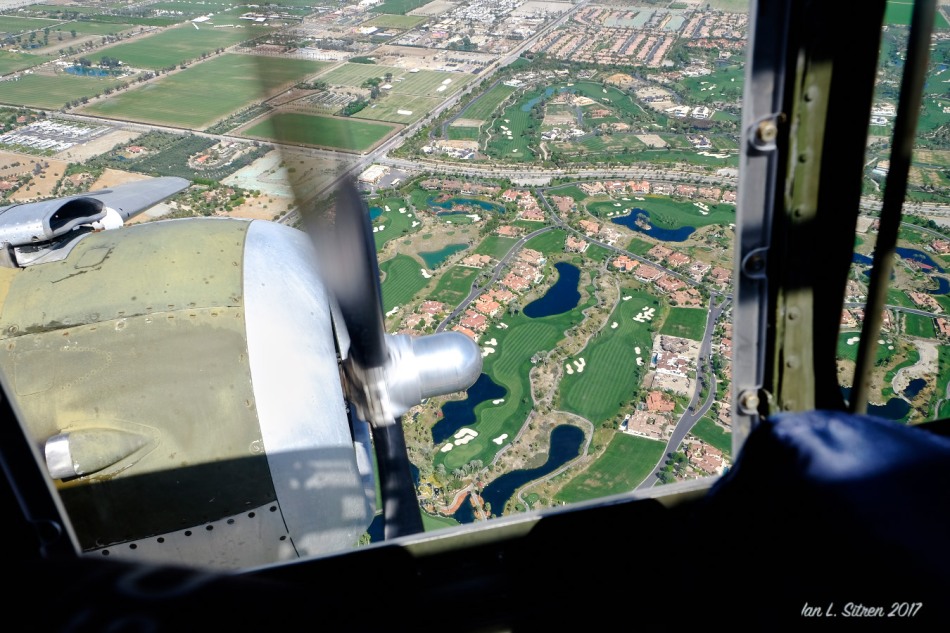 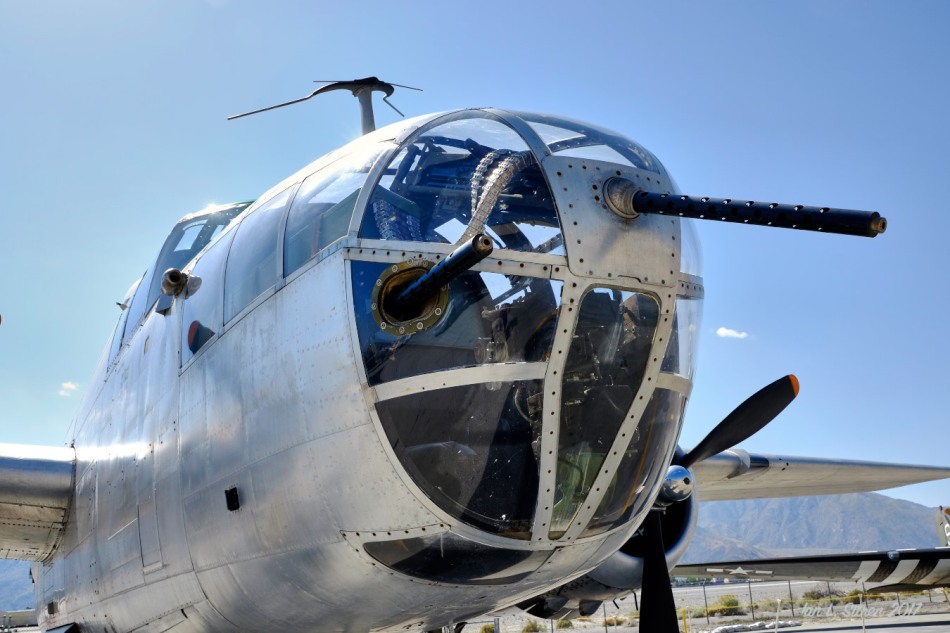 The B-25 “Mitchell” was the bomber flown off the aircraft carrier USS Hornet on April 18, 1942 for a bombing mission over Tokyo. It was intended to show that the USA could project power across the oceans and that Japan was vulnerable to an air attack. The mission was also retaliation for the December 7, 1941 attack on Pearl Harbor.

This is a B-25J version which entered service in early 1945. It was used as a crew trainer and transport. Interestingly it appears in the 1970 movie “Catch 22” as “Vestal Virgin”. Now here flying out of the Palm Springs Air Museum on it’s tour schedule. The sound of those engines starting up is worth the visit all by itself!