It might not look like much now, but by the end of the year, those restoration magicians at the Palm Springs Air Museum will have it looking like it is ready to fly off a carrier. A Vietnam War era Vought A-7A Corsair II. The A-7 flew from 1965 through the Gulf War. It arrived this morning.

For my photographer friends; Sometimes I still use my Fujifilm x30. Very convenient to have around. These are Velvia film simulation jpg’s.

The restoration crew at the Palm Springs Air Museum are nothing short of magicians. This F-102 “Delta Dagger” sat in a forest for 40 years. This entire rear section has been re-created from jigs and templates that were 3-D printed from a survey of an intact F-102. Standing next to it up close made me think two things… First, now it almost looks like it just rolled off the assembly line. Second, it is a much bigger aircraft than I had realized. Especially having seen it on a truck when it first arrived at the Museum some time back.

The Convair F-102 “Delta Dagger” was the Interceptor that served as the backbone of the United States Air Force. It entered service in 1956 and 1,000 were built, designed to intercept invading Soviet strategic bomber fleets during the Cold War. In various versions, it had a top speed of Mach 1.22 and a service ceiling of 56,000 ft. The F-102 served in Vietnam, flying fighter patrols and serving as bomber escorts, finally retiring from USAF service in 1976. There are no flying F-102s in existence today.

By the way, The first operational service of the F-102A was with the 327th Fighter-Interceptor Squadron at George Air Force Base, near Victorville, right here in Southern California in April 1956. I am looking forward to seeing the completion of this F-102 and it making it’s permanent home not far from it’s beginnings. Very exciting! 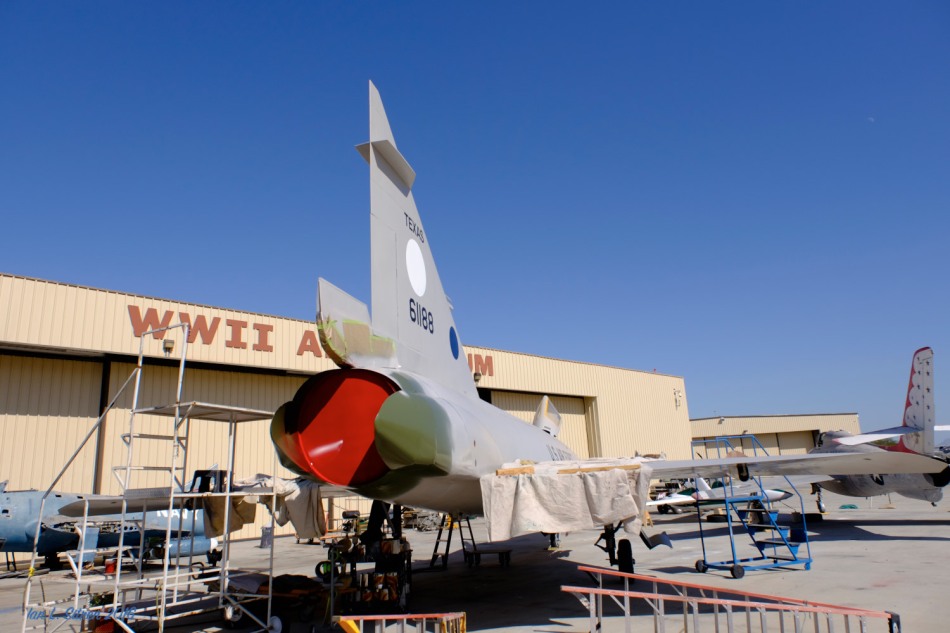 Before Photo Courtesy of the Palm Springs Air Museum