An amazing experience the other day, flying alongside the B-29 “Doc” and aircraft from the Palm Springs Air Museum.

I went to a hotel restaurant for lunch and ended up sitting next to Colonel Vaucher. The Colonel had flown the first B-29 strategic combat mission over Japan on June 15, 1944. And he flew as lead pilot in a massive 525 B-29 formation over Tokyo Harbor during the formal Japanese surrender on September 2, 1945. As a Lieutenant with a total of 2.5 hours in the B-29 he took delivery as Pilot in Command of the first B-29 to enter service. His Second in Command was a Captain but with only 90 minutes of B-29 time.

I did invite Colonel Vaucher to come see us at the Palm Springs Air Museum. And I expect in the next few months he may do that. In talking with him, I think he finds where he has been in his life as amazing as we do.

Coming up on the time of year when the Palm Springs Air Museum starts running all kinds of great programs, events and flight demonstrations. Truly my favorite place! I can’t hang out there enough. Like so many of you I was the kid who built model airplanes of World War I and World War II fighters and bombers and then jets of all kinds. Imagined what it would be like to be behind the stick of these machines speeding above the Earth, close to the ground or catapulting off the deck of a carrier. Later myself taking to the air in a Cessna and occasional other small plane. And very excited to see my buddies like Hunter Johnson take to the air too, this time in the bombardier position of FiFi, a still flying B-29. Too Fun!

Awe Striking From 70 Years Ago

It is not everyday that you see a B-29 Superfortress start up and taxi out. But you can in the video here. Mostly known for being the airplanes that dropped the atomic bombs on Hiroshima and Nagasaki, there was actually in some ways a more ominous part they played in ending of the War with Japan and the end of World War II. Flying in darkness at low altitudes, on March 10, 1945, over 300 B-29’s dropped almost a quarter of a million incendiary bombs on Tokyo itself. Can you imagine air fields filled with these giant bombers all starting up to fly a mission. And then hundreds of them overhead! Seventy years later, you can go this last remaining still flying B-29, for it’s visit today at the Palm Springs Air Museum. 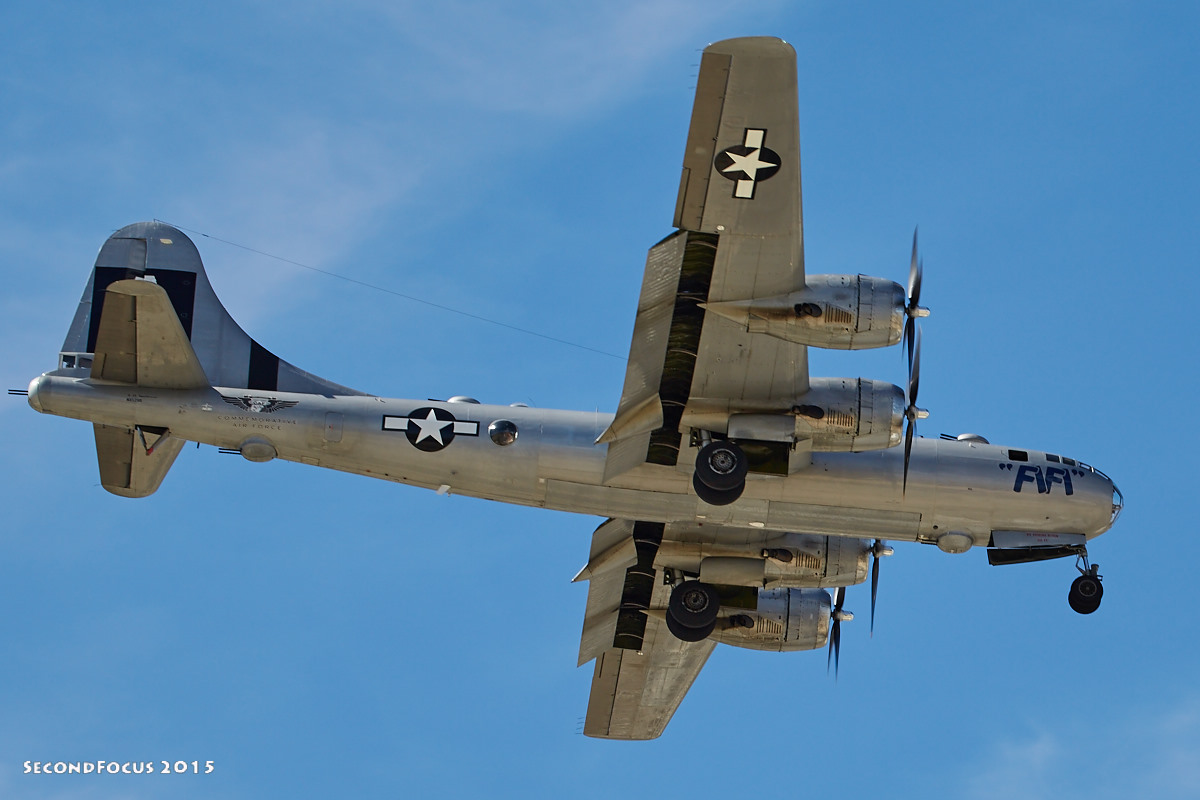 The Bombardier Over Salton Sea

My buddy Hunter Johnson about to take off this morning in the Bombardier seat in the B-29 Superfortress “FiFi”. It is the only still flying B-29 in the world. This was especially historical because out of the Palm Springs Air Museum the flight was over the Salton Sea. During 1944-1945, Lt. Col. Paul Tibbets led the 393rd Heavy Bombardment Squadron in classified missions dropping dummy atomic bombs over the Satlon Sea. Then on August 6th, 1945 by Tibbets’ flew the B-29 Enola Gay to drop the first atomic bomb on Hiroshima Japan. You can go see the B-29 “FiFi” at the Palm Springs Air Museum tomorrow Sunday and perhaps there might still be a seat available for you too! Check it out! http://psam.org

“Bucket Of Bolts” And More!

Tomorrow, Saturday, and Sunday at the Palm Springs Air Museum you can see the only remaining still flying B-29 Superfortress “FiFi”. Bring your camera like I did and will be doing. You can tour the interior, watch her fly and even take a flight! Other planes will be out there too, like “Bucket Of Bolts” a C-45 WWII Military Transport. You can fly on “Bucket Of Botls” for as little as $75! Anyway I am just really big on this because it is one of those “once in a lifetime” opportunities and just believe people should take advantage of it when it comes your way. Especially if you live right here in the Palm Springs area. Check out the Palm Springs Air Museum Facebook page and website at http://psam.org for more info.

Bored And Sipping On Your Frothy Coffee

Just imagine sitting over there in the passenger terminal waiting for your flight, slightly bored, sipping on your frothy coffee when you see this come in for a landing! Just WOW! The World’s only still flying B-29 coming in to the Palm Springs Air Museum. I really urge you not to miss the opportunity to go see “FiFi”! You can tour the interior, watch her fly or even fly on board. One of those “once in a lifetime”!

“FiFi” is the World’s only still flying B-29 Superfortress. Flown at the end of World War II, it was B-29’s that dropped the Atomic Bombs on Hiroshima and Nagasaki. There were 3,970 built and “FiFi” is the only one still flying as you can see in my photographs with her coming in to the Palm Springs Air Museum yesterday. You can go see this immense historic aircraft yourself through Sunday. Not only can you just go and look but you can tour the interior or even book a flight. But do not miss the opportunity to see this incredible part of history! 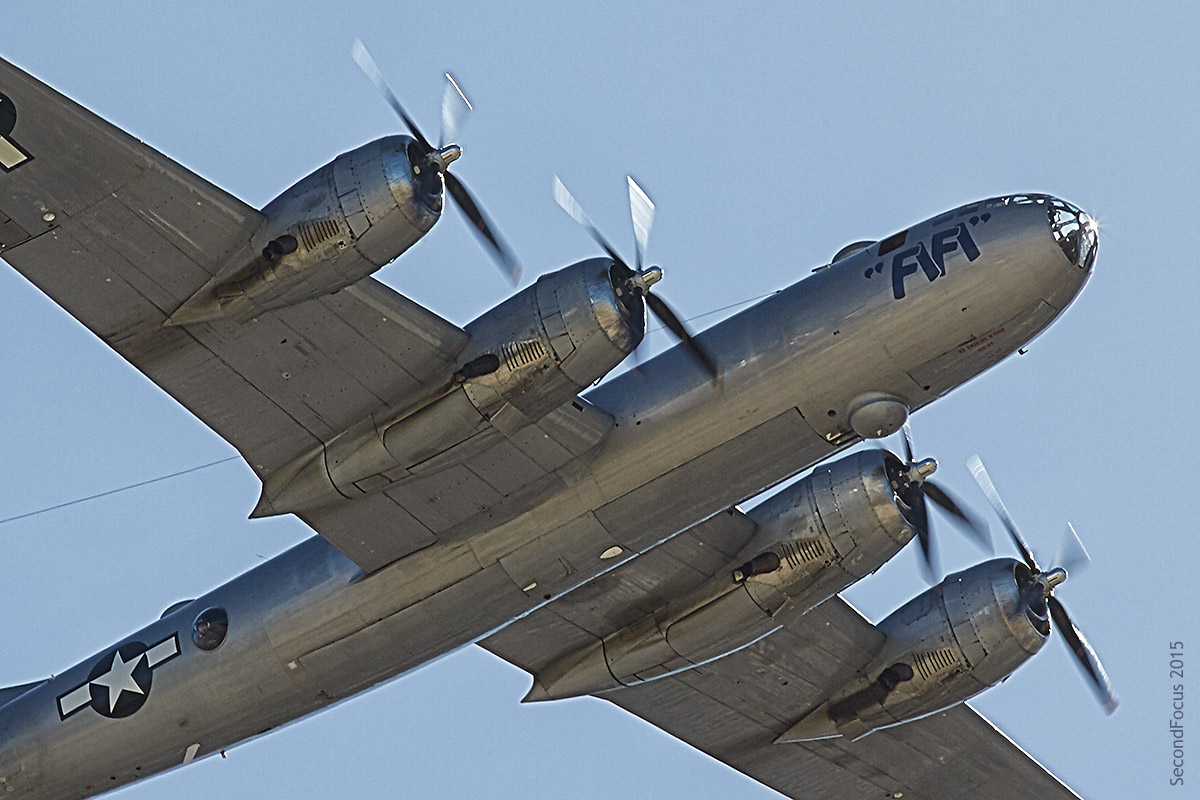 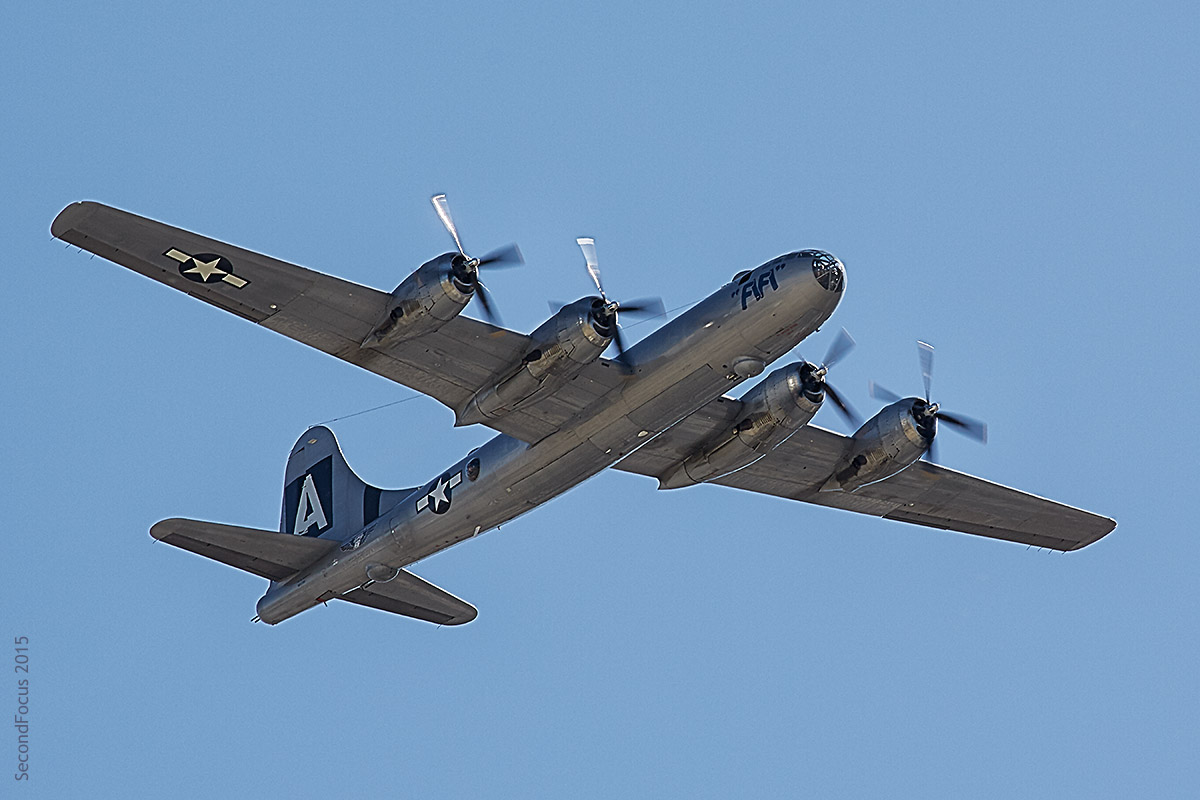 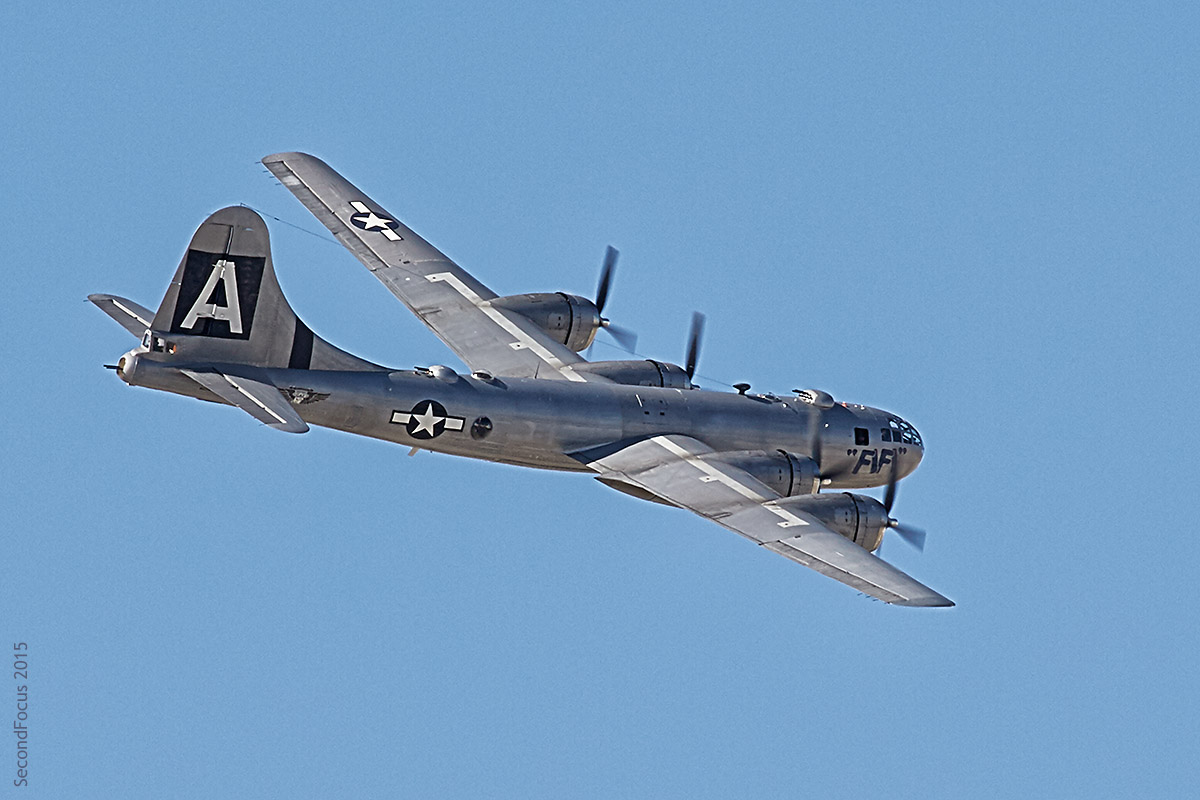