Please join us at the Palm Springs Air Museum for an exciting Workprint Test Screening of the World War II docudrama, JOURNEY TO ROYAL followed by a Q&A with the filmmakers, on Saturday, October 19, 2019 from 1:00pm to 3:30pm.

The film tells the extraordinary true story of Lt. Royal Stratton and the 4th Emergency Rescue Squadron who, over the seas on an embattled South Pacific, flew over 800 rescue missions to save the lives of 576 men.

Over the last decade, the filmmakers have traveled the world locating and interviewing the surviving members of the Squadron, as well as other WWII veterans, who share their firsthand accounts of some of the most pivotal and consequential events of that War. Their goal is to preserve the values of, and celebrate the contributions made by, the Greatest Generation.

Producer Mariana Tosca and writer-director Chris Johnson will be doing a Q&A after the screening for anyone interested in giving audience feedback or learning more about the making of the movie. Thank You! 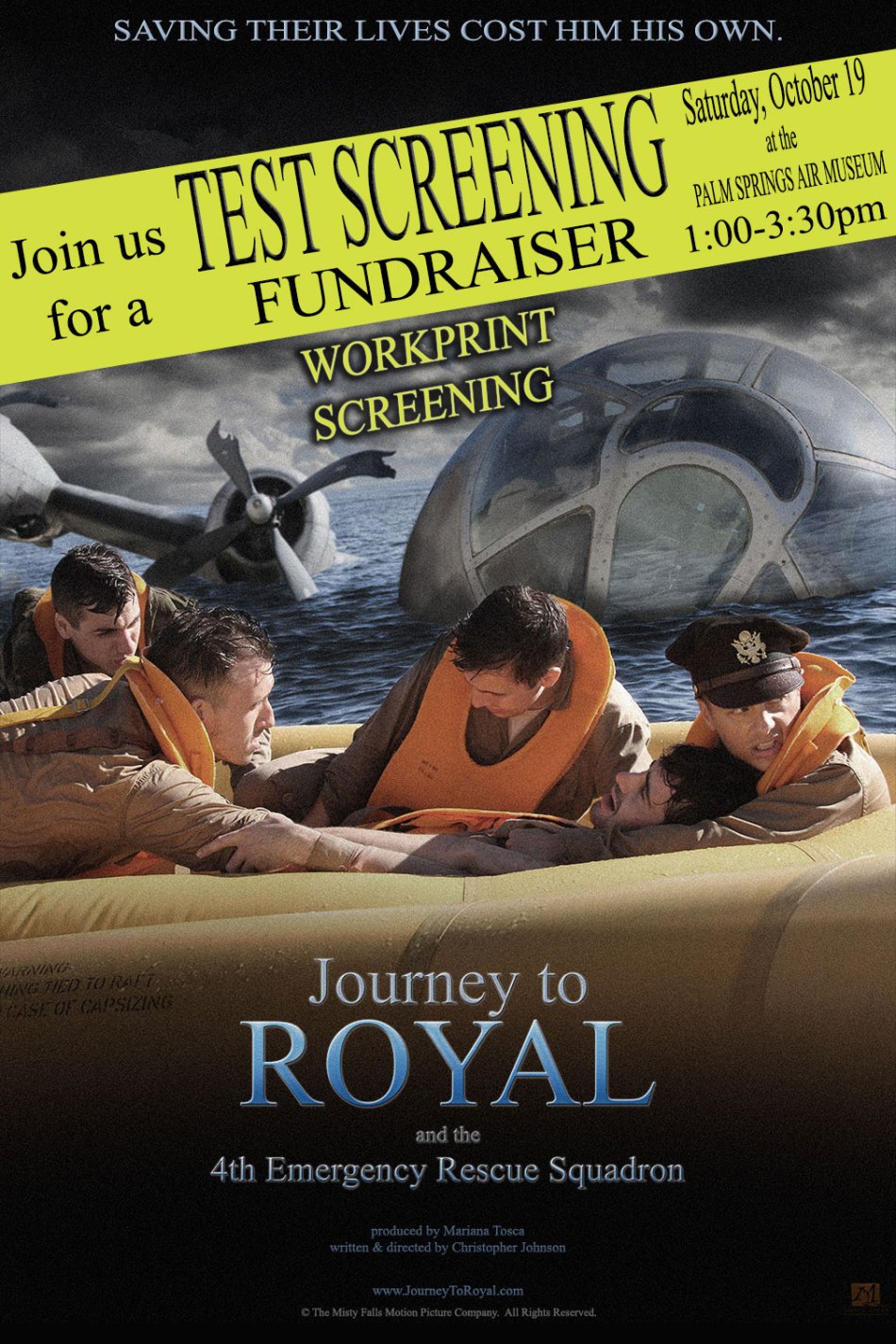 A Scene From WWII

Makes you think that you are looking at a scene from World War II. One of the very few remaining flying P-38 Lightning fighters taking off for flybys at the Palm Springs Air Museum. Photographed just yesterday against the scenic backdrop of the San Jacinto Mountains. Something to see all the time at the Air Museum and special programs and flight demonstrations on Saturdays. Be there!

The words spoken by narrator, Leonard Graves at the beginning of each of 26 episodes. One of the greatest tellings of the history and battles of World War II beginning with an unforgettable musical score by Richard Rodgers. The man who wrote over 900 songs and for 43 timeless Broadway musicals.

The beginning of each episode just breathtaking. For today, remembering Pearl Harbor; “And Now The Pacific Boils Over”.

Could He Have Imagined?

Sunday morning December 7, 1941 on an aircraft carrier in the Pacific Ocean. A Japanese pilot starts the engine of his VAL Dive Bomber. The destination is Pearl Harbor. The mission is to destroy the United States Naval Pacific Fleet at anchor. He hears and feels the drumming of that aircraft engine. Could he have possibly imagined the everlasting world changing events that he would release as he began his takeoff?

No Matter How Old You Are!

Always so very fun no matter how old you are! The sound and the power of this vintage aircraft taking flight. Just this past Saturday at the Palm Springs Air Museum. A World War II Navy fighter, the Bearcat F8F-2, here flown by pilot Steve Barber.

Among my very favorite “Nose Art” at the Palm Springs Air Museum… “Pretty Polly”. This P-63 King Cobra from World War II is now a very rare aircraft and this one even more so because it is still flying.

I have been posting a lot of my aircraft photography over the last week and I have been asked by people when I was going to be posting more of my photography of beautiful women. “Pretty Polly” is my transition going into next week when I will show you more of those gorgeous women, and some guys too! So keep coming back! Thanks!

Last Saturday at the Palm Springs Air Museum. One of the Museum’s premier aircraft, piloted by the equally premier Tom Nightingale, headed out for takeoff. Waiting while the Stearman biplane comes back in to pick up another happy passenger.

“Bunny” is a P-51 Mustang restored and dedicated to the famed Tuskegee Airmen of World War II. And specifically to Lt. Col. Bob Friend. To this day you can find the Colonel often at the Air Museum and many times in the back seat of this very special aircraft.