Social Media During Shelter In Place

What to do during this time for your business. You should be working on your social media presence for one thing. Your audience is spending much more time at that computer, and so is mine. So I decided to build my business Facebook page which had been stagnant.

Most of my Facebook reach was on my personal page over the years. But that is at my limit of 5,000 friends. And I have been on Facebook since 2008. So this is what I have done for my page “SecondFocus Photography by Ian L. Sitren” so far. Thanks!

Should/Should Not For Business In 2020

From my long time friend Leslie Burns, Burns The Attorney. She makes one point that to paraphrase also from the Palm Springs Photo Festival; Face To Face Meetings Can Change Everything. Read this all through and save it, link below…
“As we wrap up 2019 and start to look ahead, I thought I would give up some of my best thoughts on both business and legal issues, for creative pros, in list form. I think I should warn you, though, I’m not holding back on the language. I think someone needs to play Carol Kane in Scrooged to the creative industries and, well, I’m just the broad to do it. So, here’s what you should/should not do for your business in 2020″… http://bit.ly/2Y8poYd
(And no this is not Leslie Burns. From one of my photo shoots with model Aristodeme)

I have shot almost all of the photo and video content for the social media for the Palm Springs Air Museum for a few years now. But I also really enjoy finding historic video like this to use…

This graph is one direct from Facebook showing the growth I have created for one client. The red line indicates where I took over the job. Before that it was relatively flat for at least a year or more with very lackluster postings.

As a photographer, I have for a long time now continued to build my own business with social media. Perhaps I have something like 15 years doing it. As well as having been involved in building content and social media for my photo clients. So it was only a matter of course that I have applied my abilities to create content of photos, videos and writing to build and manage social media for clients as a regular part of my business.

I am not some part time guy doing this on the side. Social Media, photography and video is what I do. If you might be interested in chatting about what I might do for you, please send me an e-mail to Ian@SecondFocus.com. Happy to have the opportunity to just chat with you. Thanks!

No Motors, No Parachutes, and No Second Chances

I greatly enjoy putting these historical posts together for the Palm Springs Air Museum. Please take a moment and watch and also “Like” the Air Museum page for me. “One of the best Air Museums in the world” – CNN. I am the Social Media Manager so a big audience really helps me out. Thanks!

June 6th will be the 74th Anniversay of D-Day when the Allies invaded Western Europe in World War II in the largest amphibious attack in history.

Part of the preparation for the invasion was planning how to tow the Waco CG-4A combat glider carrying men, armament and cargo into battle. This original film shows the gliders being towed with aircraft from the P-38 Lightning to the mighty B-17 Flying Fortress, and even a PBY Catalina.

Come on in to the Palm Springs Air Museum and see our own Waco combat glider and D-Day exhibit. They flew into war with “no motors, no parachutes, and no second chances”. It is history up close and real. Thanks!

March 22, 1943: Technical Sgt. R.W. Greenwood, a Marine, sits in the cockpit of a Grumman Wildcat fighter plane, based at Henderson Field, Guadalcanal, that is credited with shooting down 19 Japanese aircraft, as illustrated by the number of Japanese flags on his plane. Several different pilots have flown the ship during successful missions, but Sgt. Greenwood has remained plane captain. (AP Photo) 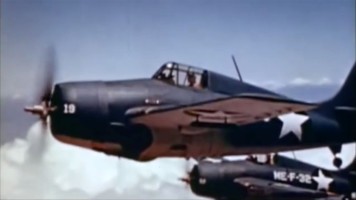 Guadalcanal…. one of the words that we see or hear that instantly causes us to remember our World War II history and the fight in the Pacific. One of the heroes of Guadalcanal, described as stubby and unforgiving and tricky to fly, was the Grumman F4F Wildcat. With all of it’s downsides, the Wildcat’s rugged build, heavy armament and fast diving speed made it, in the hands of the Marine Corps pilots, an instrument of destruction against the attacking Japanese Zero’s.

You can sit in the cockpit of that hero Wildcat of Guadalcanal from 10:30 – 12:30 and check it out and let your imagination take flight. You can get your photo taken too! Now that is a selfie! And to help with your imagination, watch The History Channel Dogfights Episode “Guadalcanal” co-created by Air Museum friend Brooks Wachtel. It is really great… https://www.youtube.com/watch?v=f8eOo3nnGuA

Did you know we had a “Cactus Air Force”? No that is not sipping Tequila at 30,000 feet on your way to Las Vegas in a 737. The “Cactus Air Force” was the name given to the airplanes, including the Wildcat, that fought on Guadalcanal. Only months after the devastation of Pearl Harbor, the United States was still well under prepared for major conflict. But in August 1942, the Marine Corps landed on Guadalcanal for the purpose of denying the Japanese the ability to threaten Allied supply and communications.

At 1:00 PM come hear the story of Guadalcanal and the “Cactus Air Force” presented by Aviation and Military Historian Michael Parra. A United States Marine and thirty year law enforcement officer, pilot and helicopter pilot, Michael Parra was also a consultant on the Warner Brothers motion picture “Memphis Belle”. Not to be missed!

Still more and maybe the best for last! Following the presentation, be on the tarmac around 2:00 – 2:30 for a flight demonstration. If you asked any bunch of aviation enthusiasts what their favorite airplane would be, way at the top of the list would be the F4U Corsair. You will be seeing a Corsair take to the air! Capable of carrying incredible armament and a top speed of 446 mph, the Corsair was also a motion picture hero in “Flying Leathernecks” with John Wayne, and the movie and television series “Baa Baa Black Sheep”. Seeing a Corsair fly right in front of you… Very Cool!

Much to do! And making it easier to stay the day, get some good food in the Freedom Cafe. Then take home a souvenir, a cap, a cool t-shirt from the Museum gift shop!

So come on by, Saturday April 8th! You will love it!!

You will find me in the January 2016 issue of Shutterbug Magazine. The “Business Trends” story by Maria Piscopo “Online Marketing Tools to Boost Your Business”, “How To Promote Your Work Online And Through Social Media”. I am really pleased to be a part of helping others get ahead in the photography business. It is really great. Actually for a few years now I have been the subject of other articles about using Social Media, written studies, lectures and even in photo business lectures in college courses. So obviously I had to tell you about it here on Social Media. Anyway pick up a copy of the January Shutterbug Magazine. It has always been one of my favorite magazines. Thanks!

Look Who Copied My Selfies Series!

Look who copied my “I Love Selfies” series!

I Love Selfies! is a series I have been running and it has worked well for a number of people. Something I can do for you right now to start raising your profile.

I invite you to send me some selfies and I will show you off on my Blog and all of my Social Media as well as my Facebook pages. You will be seen by so very many! My pages are followed extensively by magazine editors, publishers, supplement companies and tens of thousands of people. In the gym, showing off the hard work you have put in, at the pool, or just having fun.

So send me your Selfie and let’s show this guy how it’s done! My e-mail is SecondFocus@mac.com. Thanks!

I had no idea Facebook was making these suggestions for me. A little personal perhaps but the selections are quite stellar!

It was in a shopping mall where Maria Bertrand was handed a business card and told she would make a great model. She ended up modeling and appearing in ads and magazines for Guess, Versace, Gianfranco Ferre, La Vien en Rose, Dynamite, La Perla, Armani, Coke, and Le Grenier. Maria worked in Milan, Paris, London, Athens, Montreal, Toronto and Capetown. Then commercials for Audi, Miller, Bud Light, Baskin Robbins, Molson Dry, Coppertone, Pela Windows, Comcast, Michelob and Club Med. Also there are about 20 movies and television shows. And like Maria said to me “I forget half the stuff I have done “. Pretty good for being spotted in a mall!

So where is the “mall” today. One top model, Asheigh Good, who is all over everywhere today, said she was spotted at a bus stop. “They took those photos, and then nothing much happened”. But three months later they went up on Facebook. “It was only two hours before a call came in from Ford Models. One week later, Ashleigh had booked the Givenchy in Paris, as an exclusive.” – Interview from “CR Fashion Book” Spring/Summer 2014 issue.

So I am making a point… Social Media is very powerful. For those of you looking to move ahead, be the person you want to be and be careful how you use Facebook and other Social Media. And if you are using horrible photos of yourself, well, that is what will be seen. By the way, all my Social Media is watched and has been seen by millions of people from all walks of life. That includes the owners of major companies, editors and art directors from all kinds of magazines and so very more. I have found it for me to be the most powerful tool I have ever used for “getting out there”! If I can give you any assistance or ideas or when you are ready for the photo shoot, send me a note to SecondFocus@mac.com. I love seeing people become successful! Thanks! 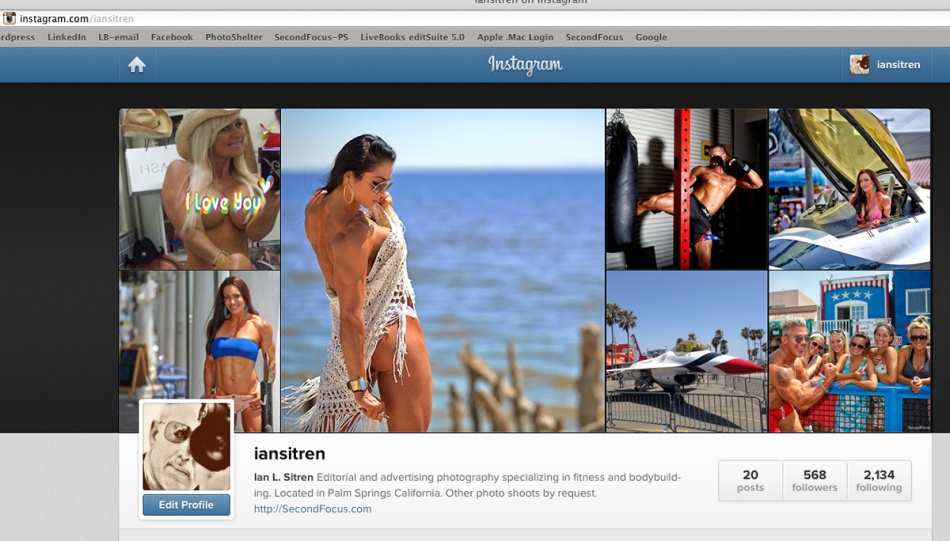 Yes I am on Instagram. Many of you have asked. I am listed with my name as “IanSitren”. Follow Me and I will Follow You! http://instagram.com/iansitren